I have discovered a truly remarkable proof of this theorem which this margin is too small to contain.
Pierre de Fermat

During the development of editors it is often needed to display additional information next to the document, such as error markers, search results or various coverage metrics. However, it is not a good idea to hardcode the list of supported markers during development, as the best ideas will be introduced by others – who do not want to have anything to do with our editor.

Luckily, Eclipse provides a simple way to attach markers to documents without explicit support needed from the editor developer: the markers (and annotations) created by their corresponding extensions are stored independently from the document, so these additions can be made without disturbing any existing user of the files.

As I described it in my previous post about error markers, such markers can be defined creating an extension for the extension point org.eclipse.core.resources.marker, and then using the IResource.createMarker() method to create the marker instances as needed. Then using some magic it can be displayed as the yellow or red wriggly lines during the text.

Other markers (and annotations) can be created in similarly: we create our own marker type, and register an annotation type for it, and the platform manages the rest. In my case I wanted to represent a calculated set of program statements similar to the code coverage display used by the EclEmma tool: the covered statements are highlighted with the green background. 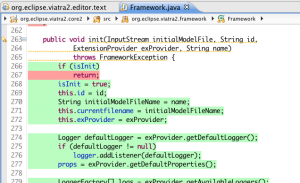 To support such a display, I created a new marker type, that is a text marker; and to make the lifecycle-management easier, I did not set it persistent. This has been reached using the following code:

The most important difference between this marker and the one defined in the previous Markers and Annotations post is that the newly defined marker is not a problem marker, but a simple text marker. This means, the created marker will not show in the Problems view (that is nice – we don’t want to display problems now), and no default annotation is created (that will need fixing).

In theory it is possible to create annotations programmatically together with the markers, but in practice it is really a bad idea. First of all, annotations are created for the document model (thus assuming an open editor and a code dependency to that document model), are never persisted, and the resulting code fails indeterministically (I once debugged a code like that, every annotation creation code ran correctly, but some annotations were missing; re-running the code re-added the missing ones, but sometimes removed others), so this idea will not work.

To define the appearance of the created annotation the org.eclipse.ui.editors.markerAnnotationSpecification extension point can be used. In the extensions we have to specify the annotation display methods used together with color and formatting settings.

Even better, by assigning preference keys to the various settings the platform also offers the users the possibility to configure the annotations: the General/Editors/Text Editors/Annotations preference page will list our annotation, and allows setting its preference values. If the preference keys are unique (that is our responsibility 🙂 ), then creating this extension ends our work: annotations will be generated automatically, and they will be displayed in the opened text editors.

The marker creation process is entirely the same as the creation of error markers: a new marker is initialized using the IResource.createMarker(String markerId) method, and the IMarker.CHAR_START and IMarker.CHAR_END markers are set for positioning the markers.

Alltogether, the markers and annotations provide an easy way to extend existing editors with meta-information (e.g. execution state, dependencies, coverage, etc.), that can be used with a very little amount of Java programming. Sadly, the content assists for extensions is not that discoverable as the Java APIs, so a lot of experimenting and/or documentation reading is needed. Luckily, documentation is available for these extension points, so knowing their name will be enough for most cases.

So, lets hope, Eclipse gives us a big enough margin to contain our metainformation.

Development in Eclipse keeps fascinating me, as there are a lot of very thoroughly designed services and features integrated to allow detailed customization – on the other hand, “with big power comes big responsibility”, but at least a steep learning curve. I had such an experience with the problem handling support not long ago.

Of course that was caused by the fact that we were rolling out our own implementation of marker/annotation synchronization – we were not aware that the JFace TextEditor provides such a service out of the box – and I did not found it documented on the various locations (that’s why this blog post is born 🙂 ).

The management of the markers is well described in the Mark My Words tutorial. Basically markers are attached to IResources, and provide a simple key-value interface with a freely definable key set (and the IMarker interface specifies some commonly used keys).

Following the tutorial we could create our own marker with the parent of the org.eclipse.core.resources.marker marker, after this adding the markers to the selected files managed the error display in the Problems and Project Navigator views.

So our marker definition looks as follows:

The problem marker understands severity, error message and line number parameters, and is capable of displaying them in the Problems view.

As stated before, markers could be added easily without knowing anything about who has opened the file currently, so they are really useful for error feedback, but this information should be also available in the open editors.

Our first idea may be to create some glue code, that listens to the marker changes, and updates our editor accordingly. The drawbacks of this approach are first the fact that we have to code something that trivial, and the second (as we saw in our project), that the editor update could be quite tricky (missing or not deleted annotations).

My theory is, that we have encountered some kind of race condition with our naive implementation, as the annotation creation code was always executed, but sometimes the results were lost. So, in the end, this listener is not so trivial. 🙁

This was the part that gave us the most headache – we did not understand, what caused the inconsistent display problem. On the other hand, knowing one extra fact (“magic”) the problem is trivially solvable.

So, here comes the Eclipse magic: we don’t have to create this service manually, we should reuse the already existing one. For that, we would need that our marker also become a child marker of the org.eclipse.core.resources.textmarker, and a minimal set of position data should be added to the marker.

And the marker creator Java code looks as follows:

After that, the platform uses a default implementation, that provides the well-known wriggly underline to annotate our text files with the associated markers.

Altogether, the following steps are needed to provide a simple error reporting for our existing editor:

The Eclipse text editors provide a well-defined, easy to use error reporting mechanism nearly for free. The main catch is, we have to be careful to set everything – if something is missing, we got the silent failure issue – no exception is thrown, but something is not shown.

The biggest issue in our implementation was that the IMarker.CHAR_START and IMarker.CHAR_END marker attributes are ignored, if the used marker is not a text attribute, making this problem hard to identify.

A fine thing with this error reporting mechanism is, that it is independent of the concrete text editor used: when we changed our implementation in the VIATRA framework, the resulting reports were visible in every text editor (e.g. the dedicated VIATRA text editor, or the default text editor in Eclipse) – thus helping error recovery.